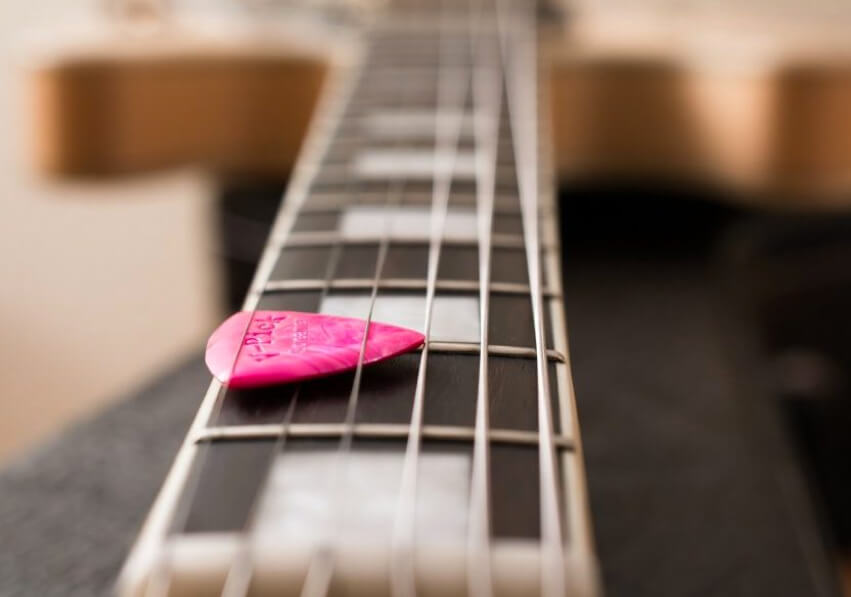 If you are a beginner guitarist shopping around for your very first guitar, you might be uncertain as to what model guitar is best for you: an acoustic or electric. Some say you should start with an acoustic because it’s harder to play and will make your hands and fingers stronger, quicker, while others say you should start with an electric because it’s easier to play, making for early success. Still others believe there is a system that goes you get an acoustic guitar first, and then if you stick with it and reach some level of proficiency, you graduate to an electric in a couple years.

But an acoustic guitar isn’t the musical equivalent of training wheels, and the answer to what guitar you should start playing on is a bit more involved than just asking another guitarist what kind of guitar he started on. As a beginning player, your experience with your first instrument is vital to your long-term success. Choosing the right guitar could very well mean the difference between mastering the instrument and completely losing interest in it.

To help you decide which guitar type is right for you starting out, let’s begin by learning a little about both acoustic and electric guitars and what makes them different from one another.

The body of the acoustic guitar is much larger than that of the electric and usually has a wider neck to support the tension of the heavier strings. Since the strings on an acoustic are thicker, they need more room to vibrate, which necessitates a higher action (height of the strings above the fretboard) to prevent them from buzzing. Generally, the higher a guitar’s action, the more difficult and uncomfortable the guitar is to play and vice versa.

There are two basic types of acoustic guitar: the classical nylon-string and the steel-string acoustic. Each has its own distinct feel and sound. Nylon strings produce a warmer tone while steel strings produce a clear, rich and varied sound at a higher volume. Nylon strings are easier on the fingertips than steel, but the neck of a classical guitar is much broader than that of a steel-string model, which can make it hard on the fretting hand.

Since you don’t need an amplifier or electricity to play it, the acoustic guitar is highly portable. You can just grab it and play pretty much anywhere you want — like on the beach or at a carwash fundraiser.

Acoustic guitars are often associated with mellower music, though they can be heard in all styles of music from country to blues to heavy metal. While pop musicians tend to use steel-string guitars more often than nylon strings, many guitarists play both types of instruments depending on their mood and style of music. Eric Clapton, mainly a steel-string player, used a classical guitar in “Tears From Heaven,” while the Eagles used a classical on the live acoustic version of “Hotel California.” For sheer convenience and adaptability, an acoustic is hard to beat.

An electric guitar uses a pickup to convert the vibration of its strings into electrical impulses. The pickups and amplifier do all the work of projecting the sound. Because of this, lighter strings can be used which allow for a lighter touch.

The two main types of electric guitar are the solid body and semi-acoustic. Most electric guitars are not hollow, thus when you strike the strings, the sound produced is very quiet and requires amplification.

Electric guitars have a few more bells and whistles than acoustics, which some beginners may find a bit intimidating, at least initially. But all the knobs and buttons and pedals associated with an electric will ultimately allow you to play around with distortion and different effects, which are really cool.

Since an electric guitar needs to be plugged into an amplifier to be heard, it’s not all that portable. For some, the extra effort it takes to plug the guitar into an amplifier and turn it on may be enough to keep them from playing as often or taking advantage of a spontaneous moment to pick it up and play.

Because of their more aggressive sound, electric guitars play a different role in music than do acoustics. Whereas acoustic guitars are often used to strum chords, the electric guitar is often used in two roles: as a rhythm instrument, which provides the chord progression and sets the beat; and as a lead guitar, which is used to perform melody lines, melodic instrumental fill passages, and guitar solos.

So now that you know a little more about both styles of guitar, there are several questions you need to ask yourself to help clarify which model is right for you:

How quick are you to throw in the towel? Ease of learning may or may not factor into your decision, but for those who get easily discouraged and lose interest in something altogether if they don’t see quick results, an electric is probably the way to go. Because the electric is smaller and has lighter strings with lower action, you can typically start playing the basics of guitar much more quickly and easily on an electric guitar than you can an acoustic.

What kind of music do you want to play? If you’re into country blues, folk music, bluegrass, fingerpicking, or strumming chords, an acoustic guitar is the way to go. On the other hand, if you want to play rock, heavy metal, blues rock, and a lot of lead, an electric guitar is more likely what you want. What’s important here is that you choose a guitar that fits the style of music you’re into. If you get stuck with the wrong type of guitar, chances are you’ll be less motivated to pick it up and play it regularly.

What if you want the option of playing both ways? If you answered “both” to the previous question, consider the versatility of an acoustic-electric guitar (also called an electro-acoustic guitar.) Unplugged it has all the attributes of a standard acoustic guitar, but thanks to a built-in pickup and preamp, an acoustic-electric is easy to plug into a PA system or guitar amp when you’re playing with a band. But for the purpose of this article, let’s stick to acoustic or electric.

What’s your budget? As a new player, you may not want to spend too much on a high-end guitar just yet, be it acoustic or electric, especially if you’re not sure playing guitar is something you’ll stick with. Keep in mind that starting out with an electric guitar is generally more expensive than an acoustic guitar because of the need for an amplifier and other accessories. For this reason, acoustic guitars are more often the choice for a first instrument, since they tend to be slightly less expensive. If you want to learn on an electric guitar but budget is a serious issue, many guitar stores offer starter electric guitar/amp packages at very reasonable prices. Always remember to work within the parameters your budget.

Do you plan to transition from one type of guitar to the other? Well, of course you do! Over time you will naturally desire to play another type of guitar. Don’t worry that by choosing one model guitar over the other you have locked yourself into that type of guitar for the rest of your life. Many players will start with one kind of guitar and gravitate to the other in time. Most players agree that as a beginning guitarist, it’s considerably easier to switch from an acoustic to an electric than the reverse. The finger conditioning and chording skills you’ll develop on an acoustic guitar will make the switch to an electric with its lower, faster action that much easier later on. It’s a pretty safe bet that throughout the course of your guitar playing, you will most likely develop skills on both the acoustic and electric guitars.

Okay. Now that you have some things to consider, it’s time to drop by your local music store and try out several guitars. Play around on both acoustic and electric models, even if you’re fairly certain you know what type you want. Be sure to select a guitar you know is fully inspected and adjusted for easy playability. A poorly constructed instrument or one that is not correctly set up will impede your progress and can suck all the fun out of playing. Both the acoustic and electric will play with relative ease as long as they are properly adjusted and sized to the player.

Don’t be impatient and rush the process. Go back to the music store as many times as you need to. Play around and experiment with all types of guitars until that one jumps out at you and screams “Buy me!”

Take all this information to heart, but in the end, be guided by the music you like and hear in your head. When your guitar sounds like the guitars that made you want to play in the first place, you’ll be more likely to stick with it and flourish as a guitarist.

How To Install Pinned Tuners

How To Make A Guitar Stay In Tune